Like humans, apes communicate to start and end social interactions

Apes use specific gestures to start and end social interaction. A behavior not seen outside of the human species until now, report scientists from the Universities of Neuchâtel (UniNE) and Durham (UK). They also found that the social and power dynamics between the interacting apes affected the communication efforts used, which the researchers say mirrors patterns similar to human politeness. The findings are published today in the journal iScience. 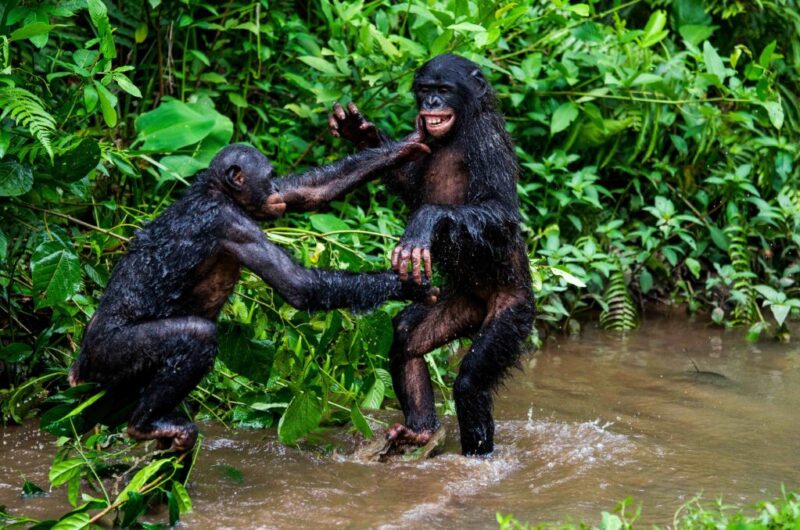 Bonobos exchange entry signals and mutual gaze prior to playing 90% of the time. Emilie Genty

“We were able to launch rockets and land on the moon because we have the ability to share our intentions, which allows us to achieve things so much bigger than a single individual can achieve alone. This ability has been suggested to be at the heart of human nature,” says Raphaela Heesen, a postdoctoral researcher at Durham University and former PhD student at the University of Neuchâtel. Sharing intentions and working together on a common goal leads to a mutual sense of obligation otherwise known as joint commitment—and now, she and her team are seeing evidence in great apes that might challenge the long-held claim that joint commitment is unique to humans.

In a previous experiment of joint commitment, human children protested when an experimenter abruptly stopped playing with them. Offering toys or vocalizing, the children tried to re-engage the experimenter in their previously agreed-upon play. “We witnessed a similar situation between two bonobos—who were interrupted (experimentally provoked) while grooming but then used gestures to resume the interaction with each other”, adds Emilie Genty, co-author of the article and researcher for the Swiss National Centre of Competence in Research (NCCR) Evolving Language.

This new study, carried out in the framework of the NCCR Evolving Language, broadens the scope of the researchers, since it focuses on groups of bonobos and chimpanzees, without the intervention of the experimenters. Heesen and her team proposed that joint commitment isn’t solely based on the feeling of obligation between two participants to fulfill a shared promise. Instead, it also involves the process of setting up the agreement and mutually deciding afterward that the agreement has been fulfilled.

That means something as simple as entering a conversational commitment with eye contact and a “hello” and then signaling that a conversation is wrapping up with repeating “okay, sounds good” or a “goodbye” could be an example of this process. So Heesen and her colleagues set out to see if great apes had a similar interaction entry and exit process, which she and her team argued would demonstrate the process of joint commitment.

After analyzing 1,242 interactions within groups of bonobos and chimpanzees in zoos, they found that the apes did in fact frequently gaze at and communicate with each other to start and end interactions. Bonobos exchanged entry signals and mutual gaze prior to playing 90% of the time and chimps 69% of the time. Exit phases were even more common, with 92% of bonobo and 86% of chimpanzee interactions involving exits. The signals included gestures like touching each other, holding hands or butting heads, or gazing at each other, before and after encounters like grooming or play.

The researchers also considered factors like how close the apes were to each other socially or who had more power over the other. Interestingly, the closer bonobos were to each other, the shorter the duration of their entry and exit phases, if they existed after at all. The authors say this pattern is similar to how we, as humans, communicate with others, too. “When you’re interacting with a good friend, you’re less likely to put in a lot of effort in communicating politely,” Heesen says.

However, the level of friendship and strength of social bonds didn’t seem to affect the chimpanzees’ entries and exits at all. This could be because in comparison to chimps’ despotic power hierarchies, bonobo societies in general are documented to be more egalitarian, with emphasis on friendships and alliances between females and close mother-son relationships.

As for understanding the origin and evolution of joint commitment, this study is another step forward—but Heesen says there’s a still a lot to do. “Behavior doesn’t fossilize. You can’t dig up bones to look at how behavior has evolved. But you can study our closest living relatives: great apes like chimpanzees and bonobos,” says Heesen. “Whether this type of communication is present in other species will also be interesting to study in the future.”